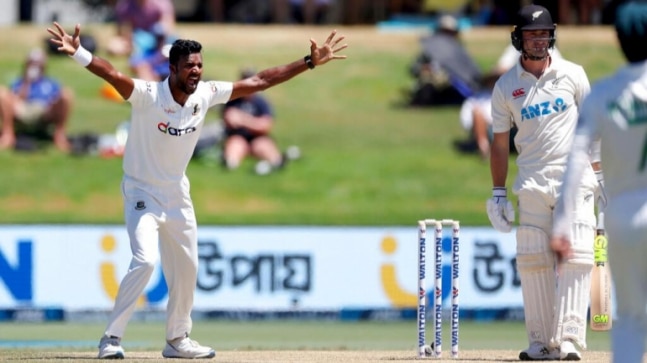 Mount Maunganui Test: Bangladesh have never won a match in any format in New Zealand but Mominul Haque’s side has an opportunity to seal a historic victory after Ebadot Hossain jolted New Zealand on Day 4 of the first Test.

Bangladesh have given themselves a great opportunity to win their first-ever match against New Zealand in New Zealand as the visitors had New Zealand reeling at 147/5 after taking a first-innings lead of 130 runs on Day 4 in the first Test of a 2-match series in Mount Maunganui.

Since 2001, Bangladesh have played 32 matches across all formats in New Zealand but are yet to taste success but Ebadot Hossain’s late burst with the old cherry on Day 4 has sparked hopes of a historic Test win. Earlier in the day, Bangladesh’s lower order put up a strong show with the bat as they posted 458 in response to New Zealand’s 328 in the first innings.

Bangladesh got the wickets of first-innings centurion Devon Conway and captain Tom Latham cheaply on Day 4 but Will Young and Ross Taylor resisted the visitors’ charge with a 63-run stand. Bangladesh fluffed quite a few opportunities to get Taylor out early after a series of wasted reviews.

However, fast bowler Ebadot Hossain, who charged in throughout the day hitting speeds of over 140 kph consistently, jolted New Zealand with 3 late strikes, including two in an over.

Ebadot began New Zealand’s slide by getting opener Will Young out for 69 bowled. He then got Henry Nicholls in the same over with a beauty that hit the top of the middle stump. In the following over, Ebadot got wicketkeeper-batter Tom Blundell out LBW for 0, shifting the momentum in favour of the visiting side.

New Zealand are effectively 17 for 5 with Taylor, playing his penultimate Test, unbeaten on 37, along with inexperienced Rachin Ravindra on 6. Mominul Haque’s men will be hoping for quick wickets on Day 5 morning in Mount Maunganui even as the pitch has started to do some tricks.

The end was delayed by a 75-run partnership for the seventh wicket between Mehidy Hasan Miraz and Yasir Ali, then hurried by the arrival of the third new ball which swung.