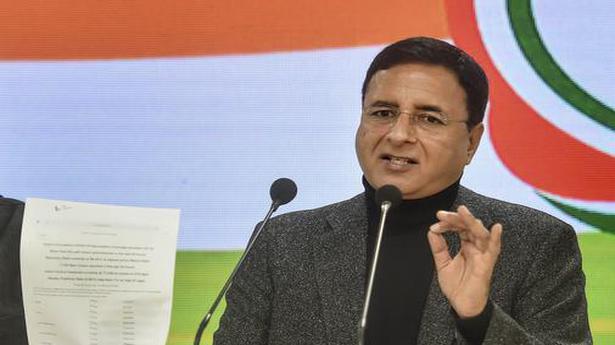 The Congress on Sunday asked Prime Minister Narendra Modi to apologise to farmers for promising that their incomes would be doubled by 2022.

“Today Modiji is in Meerut. Please tell us if the incomes of the farmers have been doubled. Do remember that on February 28, 2016, he had promised to double farm incomes by 2022. This too turned out to be a jumla [empty rhetoric]. The Prime Minister should apologise to the farmers,” Mr. Surjewala said.

Meerut being the centre of western U.P. that has a pre-dominance of Jat farmers, the Congress has been attacking the Modi government over the agrarian issues.

From claiming that the government will bring back the three controversial farm laws once the Assembly elections are over to reminding the farming community of the BJP’s promise to double farm incomes by 2022, the Congress has been attacking the BJP over “its record on agricultural issues”.

At a press conference on Saturday, Mr. Surjewala had claimed that the only way to keep the BJP’s anti-people policies at bay is to ensure their defeat in the upcoming Assembly elections.