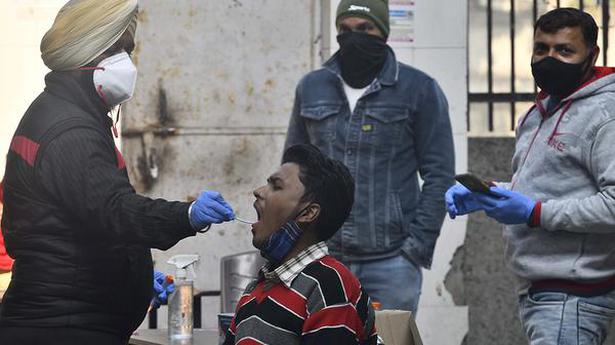 Number of COVID cases increasing across all States with 33,000 new cases recorded in last 24 hours; 8,082 new infections in Mumbai, 4,099 new cases in Delhi

A rising trend in COVID-19 cases was reported from almost all States across India, though hospitalisation trends have not been showing a similar spike.

Even as schools reopened after Christmas vacation on Monday in all States, the rapid increase in cases might see schools closing again.

The surge in cases is led by Maharashtra, with the State recording 12,160 new infections on Monday taking its active case tally to 52,422.

The State also reported 68 Omicron cases, taking its tally of the new variant to 578 . Of these, 259 have been discharged so far. However, a majority of the cases were either asymptomatic or mild in nature.

Mumbai recorded the maximum new cases in the State — 8,082, of which, 90% (7,273 cases) were asymptomatic, said health department authorities. Till now, the total bed occupancy is just 12.2%.

Delhi reported 4,099 new cases in the last 24 hours, the highest in seven months, as per a Delhi government bulletin. This is a 28.3% increase from 3,194 fresh cases reported on Sunday.

But about 95.3% of the total 9,029 hospital beds are vacant as of Monday and Health Minister Satyendar Jain assured that the situation was under control.

With its biggest single-day jump in COVID-19 cases since May last year of 388 new infections in poll-bound Goa during the year-end festivities, the State government on Monday finally imposed a night curfew from 11 p.m. to 6 a.m. in the coastal State.

Four new cases of Omicron were also reported in the State.

Meanwhile, 66 passengers have tested positive out of the 2,000 samples tested from the cruise ship Cordelia. The ship had come from Mumbai and is presently docked at the Mormugao . The decision on allowing the passengers to disembark was awaited

Gujarat recorded 1,259 new cases and three deaths. Active case tally reached 5,858 out of which 16 patients are on ventilator support. The State also logged 16 new cases of Omicron, taking the total tally to 152. Of this, 85 have been discharged.

Kerala logged 2,560 new cases of COVID-19. The Health Department also confirmed 29 new Omicron cases, taking the total tally of the variant in the State to 181. Of these, 42 patients have been discharged so far

The State’s active case pool has touched 19,359. However, hospitalisations are shrinking and just 2,225 persons being treated for moderate or severe COVID.

In Andhra Pradesh too, the active case pool has been rising steadily since the past five days with 122 new infections taking the active cases to 1,278

For the second consecutive Odisha reported 424 new COVID cases, taking the tally of active cases to 2,209. No new Omicron cases were reported

Karnataka added 1,290 new cases of Covid to its case tally taking its active case load to 11,345. Five Covid-related deaths were also reported . So far, 77 Omicron cases have been reported in the State