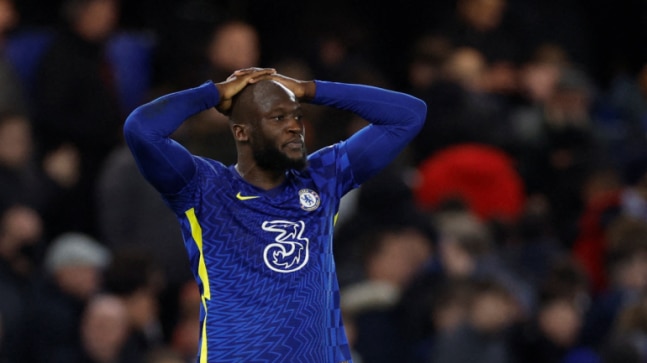 Chelsea manager Thomas Tuchel said that forward Romelu Lukaku has apologised for the comments he made about the club and about returning to Inter Milan and has now returned to the squad.

Lukaku was dropped from the squad that player out a 2-2 draw against Chelsea. (Reuters Photo)

Chelsea striker Romelu Lukaku’s stunning comments in which he said that he was not happy with the situation that the club is in and also spoke about returning to former club Inter Milan were not intentional, manager Thomas Tuchel has said.

The Belgium international, 28, was left out of the squad for the 2-2 draw against Liverpool at the weekend after telling Sky Italy that he was not happy with the “situation” at Chelsea and would like to return to Italy some time in the future.

“We have given it time to look calmly back on. He apologised and is back in the squad for today’s training,” Tuchel told reporters ahead of Wednesday’s League Cup semi-final first leg at home to Tottenham Hotspur.

“For me, the most important thing was to understand – and clearly understand – it was not intentional. He did not do this intentionally to create this kind of noise in front of a big game.”

Lukaku signed for Chelsea from Inter Milan in the close season for a club-record fee of 97.5 million pounds ($131.83 million).

“He is an emotional guy, he does not hold back with his opinion. It created some noise that you don’t want but there are zero doubts in his commitment to the team,” Tuchel added.

Fearing a backlash from fans over Lukaku’s remarks, Tuchel said it was the player’s responsibility to “clean the mess up”, but added that the club would look after him.

“Well, he’s very aware of what happened and what he created, but he can handle it… we are happy that he is our player and we will protect him. If someone strongly disagrees, this is about the team with everything we do,” said the German.

Centre back Trevoh Chalobah will miss the game against Spurs after picking up a hamstring injury on Sunday, while fellow defender Andreas Christensen and forward Timo Werner are both doubts.