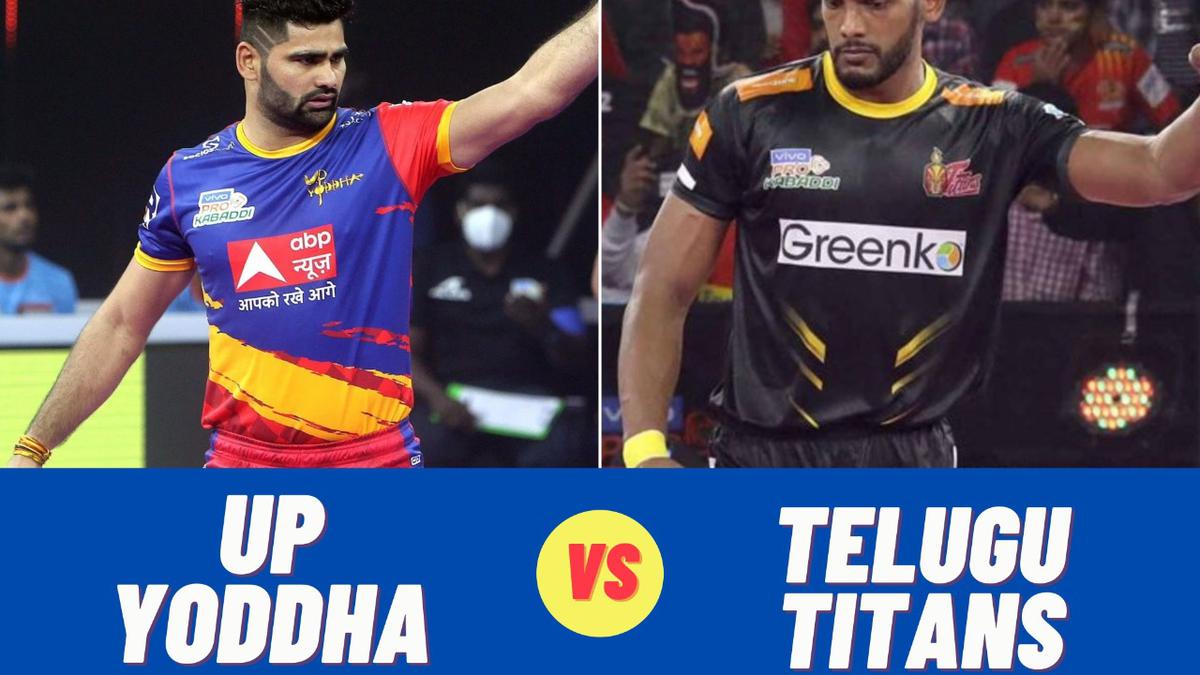 Welcome to Sportstar’s coverage of the Pro Kabaddi League. This is Nihit Sachdeva and I will be taking you through today’s PKL 8 match between U.P. Yoddha and Telugu Titans.

36-31: Pardeep has avoided the all out with another touch point.

35-30: Pardeep comes clutch as Adarsh tries unsuccessfully for the tackle.

34-30: Adarsh T gets two touch points and UP Yoddha is down to just one man – Pardeep Narwal.

34-28: SUPER TACKLE!!! Nitesh Kumar probably thought why should Shrikant have all the fun as he tackles Titans’ skipper Rohit Kumar.

32-28: Do-or-die raid for UP and it is Surender Gill who goes in. However, this time, it is Titans raider Rakesh Gowda who tackles him.

32-27: SUPER TACKLE!!! He does it in offense, he does it in defense, the name is Shrikant Jadhav. A brutal double ankle hold on Ankit Beniwal leaves him with no chance to escape.

Final strategic time-out of the game. The Titans are mighty close to getting their first win of this season.

30-27: Shrikant Jadhav has risen to the occasion and clinched bonus+touch points for UP Yoddha. The all out has been avoided for the time being.

28-27: A great back kick by Ankit on Sumit on the left corner and UP is down to just one man.

27-26: The comeback is on! Two touch points for Ankit Beniwal as he manages to send Ashu and one other UP player back to the mat.

27-24: A do-or-die raid for UP taken by Shrikant but he does not return to his side of the mat as the Titans defense takes him down.

Strategic time out. Titans probably have risen up after that sequence and will hope to capitalise on it.

27-22: A SUPER TACKLE FOR TITANS AFTER A LOT OF STRUGGLE! Prince D managed to get hold of Surender Gill’s left arm before Sandeep Kandola came in for the assist. Gill looks just too strong for both of them to control him but they do not let him escape as they literally lock him up. Love this spirit!

26-20: Surender gets Surinder. Yep. Lovely back kick on the Titans’ defender.

24-19: HIGH FIVE FOR NITESH!!! Rakesh Gowda has been sent flying off the mat.

23-19: SUPER TACKLE! First one of the match and it is Nitesh Kumar who gets it as he catches hold of Ankit Beniwal’s ankle before his two teammates come in for the assist.

21-16: A repeat of the first raid of the match where Akash tried to take Pardeep down on his own and failed.

19-16: And it keeps on getting better for Ashu Singh. A spirited dash helps him push Rajnish off the mat before he could get his hand past the mid-line. Officials reviewed and gave the point to Rajnish as it looked like he had managed to get his fingers across the mid-line. UP lost its own review in the process and Ashu is out.

19-15: After a couple of empty raids, Sandeep Kandola wins the first point of the second hald for the Titans as he gets a tight hold of Surender Gill’s ankle.

19-14: Sumit initiated the ankle hold, Ashu and others came in for the support at the right time and Ankit Beniwal is flat on the mat in the final raid of the first half.

18-14: A bonus and touch point for Surender Gill. So what if Pardeep’s not in form, eh?

15-13: An alert Ashu Singh missed no opportunity to execute a back hold on Ankit Beniwal.

14-13: Pardeep was just too slow on this occasion as Sandeep Kandola had no problem in blocking him and taking him down.

13-11: Telugu Titans back to full strength and how! Pardeep came in for the raid and Prince D just went all in to catch both of his ankles.

13-10: ALL OUT! Substitute Rakesh Gowda has been brought in for the raid and he manages to clinch a bonus point but that’s all he could do as the UP defence took him down.

10-9: Surender Gill gets a brilliant running hand touch on Prince and Telugu Titans down to just one man now.

7-9: Shrikant Jadhav does not disappoint as he gets a touch point of defender Sandeep Kandola.

6-8: Another bonus for Rajnish. Keeping the two-point lead intact.

6-7: Nice stretch by Pardeep to get a touch on Ankit at right corner.

5-7: Rajnish goes in for the raid and returns with a bonus.

5-5: Ouch! Shrikant Jadhav’s back kick finds Akash Choudhary’s nose. Touch point for UP, some pain for the Titans defender.

4-4: UP captain gets hold of Rajnish’s right ankle and does not let it go at any cost. Parity restored.

2-4: Another mistake from Ashu Singh. Ankit Beniwal opens his account of raid points.

2-3: Shrikant Jadhav has been taked down brutally by the UP defense.

2-2: Excellent ankle hold by Sumit and this time, Rajnish can not escape.

1-2: Ashu Singh tried desperately to push Rajnish off the mat but failed. A bonus and touch point for the in-form raider.

1-0: Pardeep Narwal comes in for the first raid and straight away Akash tries to take him down. However, Pardeep was very close to the mid-line and had no issue in picking up a touch point.

8-35pm: An incredible Super Raid from Vijay Kumar in the dying seconds of the match means Delhi wins the contest 28-25. Line-ups for U.P. Yoddha vs Telugu Titans out in a few moments.

8-25pm: While we wait to see record-breaker Pardeep Narwal in action, last few minutes of the first match of the evening between Haryana Steelers and Dabang Delhi are left. My colleague Lavanya Lakshminarayanan is covering that game which can be followed here:-
Pro Kabaddi PKL 8 LIVE: Naveen Kumar injured again, Haryana Steelers take slender lead over Dabang Delhi

8-15pm: Telugu Titans will look to finally get their first win of the season against U.P. Yoddha. They currently have six losses and two ties in eight games and have dearly missed the services of Siddharth Desai. Ankit Beniwal and Rajnish have tried their best to come forward in Desai’s absence but the Titans need much more than that to turn their season around.

8-10pm: U.P. Yoddha comes into this match on the back of a single win in their last five games. It could have been two wins but a disastrous final two minutes saw them eventually settle for a  36-36 tie against Haryana Steelers on Wednesday after leading for most part. Raider Surender Gill and Pardeep Narwal, the most expensive player in PKL history, were in fine form against Haryana. U.P. Yoddha have a chance to find some consistency against last-placed and winless Telugu Titans.

8-05pm: The 2022 edition of the Sportstar Aces Awards is back and we are celebrating the marvellous year for Indian Sports that 2021 was. From Neeraj Chopra and the other Olympic and Paralympic medallists to the Indian cricket team, we have a bunch of nominees who need your vote to win! Support your favourite athlete/team here.

8pm: Hello folks! Welcome to our live coverage of the second game of the evening between U.P. Yoddha and Telugu Titans. Before we get to that, here are the results from the last three days –