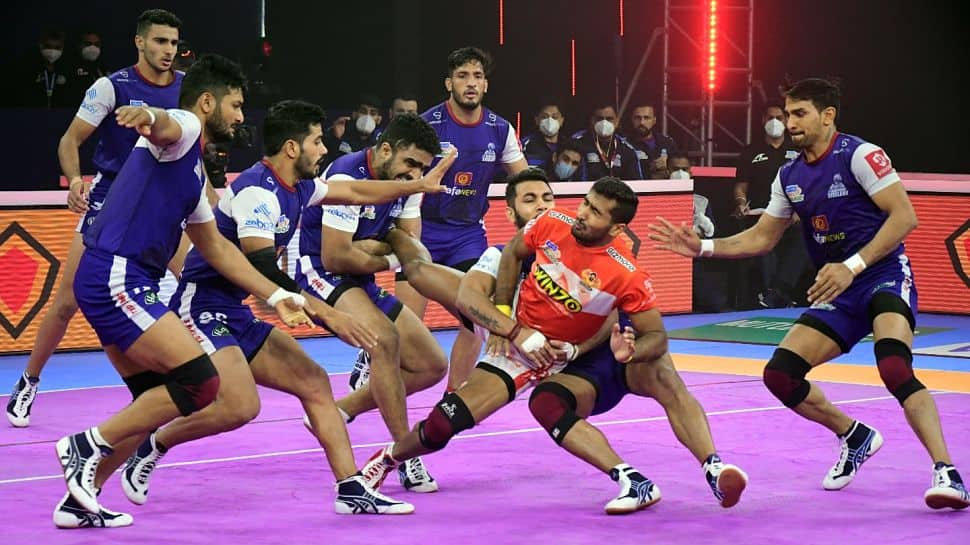 The Haryana side took a massive lead in the first half, but the Giants clawed their way back and gained the lead in the last few minutes of the game.

However, the Steelers held their nerve and found a way to close out a sensational win.

In the second match of the day, Pawan Sehrawat was the star as Bengaluru Bulls decimated Puneri Paltan 40-29 . The star raider scored 11 points, 10 of which in the second half that helped the Bulls overcome a 6-point lead Pune had at the break.

Paltan had a great start to the match but lost their composure against an experienced Bulls attack.

In the first match, Kandola was Haryana’s best player in the match with 11 raid points.

Gujarat Giants took the lead early in the match. Kandola effected a couple of brilliant raids and helped his team get its nose in front.

In the 12th minute, Meetu helped Haryana extend their lead even more after pulling off a fantastic raid. The Steelers carried out another All Out in the 14th minute to lead 18-6.

Kandola effected a fantastic raid in the last few minutes of the first half as the two teams went into the break with the Steelers leading 22-10.

The Giants started the second half strongly as they picked up a few points quickly. However, the Steelers carried out a Super Tackle and led 24-14.

The Giants carried out an All Out in the 28th minute and reduced Steelers’ lead, but the Haryana side kept picking up points and kept forging ahead.

Meetu pulled off a brilliant raid in the 32nd minute as the Steelers led 30-25. However, the Giants inflicted an All Out in the 37th minute and gained the lead at 32-31.

Meetu kept Haryana in the game after pulling off a Super Raid in the 39th minute of the match as the two sides were locked at 35-35.

The Steelers carried out a fantastic tackle in the last minute of the match and regained the lead at 36-35.

Kandola then pulled off a couple of raids in the dying seconds of the match and helped his team record a thrilling victory.

In the other match, Pune raiders started brightly. The young raiding duo of Mohit Goyat and Aslam Inamdar regularly found chinks in the Bengaluru armour.

At the other end, Bengaluru struggled for points with both their top raiders Pawan Sehrawat and Chandran Ranjit looking tired. Pune defence, marshalled by the experienced corners Baldev and Vishal Bharadwaj, ensured that the Bulls got no easy points.

Pune clinched their first All Out in the 15th minute to open a five-point gap. Bulls tried to fight back with their young raider Bharat but the half ended 18-13 with Pune in the lead.

After the break, Pawan Sehrawat led the Bulls’ charge with multiple raid points that eventually gave them an All Out in the ninth minute. There was a definite shift in momentum as Pune’s next-generation stars looked leaderless on the mat.

Bulls clinched another All Out with six minutes remaining and opened a 12-point lead. Pawan Sehrawat raced to yet another Super 10 as Pune struggled to cope with the intensity.

The experienced Bulls players avoided any slip-ups in the final minutes to ensure they get all five points. Pune could only muster 11 points in the second half which will have coach Anup Kumar worried.