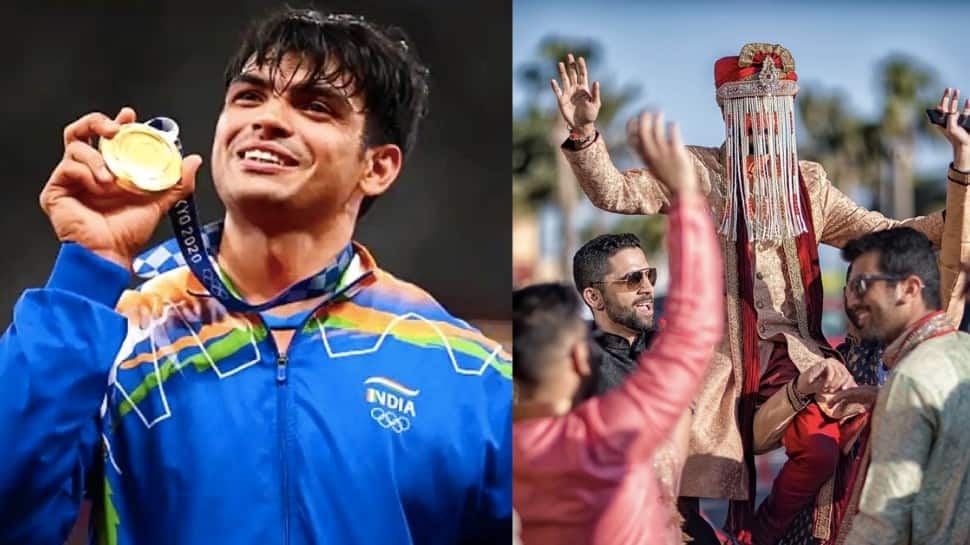 Neeraj Chopra blames ‘shaadi season’ for fleeing away from India and train in USA : #RashtraNews

India’s Tokyo Olympics 2020 gold medallist Neeraj Chopra revealed that he moved to the US to focus on his training to get away from distractions caused by wedding invitations in India.

Recently, Chopra moved to the US to get away from the unnecessary limelight in order to focus on his training and revive his fitness as he hasn’t participated in any competition after winning gold in Tokyo Olympics.

Chopra is no doubt the toast of the nation after becoming only the second Indian individual gold medal-winner at the Olympics in 2021. Owing to his huge achievement, the javelin thrower became the household name in India, but with great fame comes great responsibilities and apparently numerous wedding invites, which is one of the reasons why Neeraj moved to the US.

During a press conference, Neeraj said, “We, athletes, stay detached from families and friends and train for competitions for most of the time of our career. After winning the medal at the Olympics, suddenly I got to meet a lot of people. They were happy around me and showered their praises. But often it creates pressure among athletes and leads to an invisible burden of expectations, which can affect mental health and make you tired. So it is necessary to get back to what you are used to. I am again finding more solace after getting back into training.”

Speaking about finding it hard to train in India, Neeraj went on to say, “The winter had set off in Haryana (Chopra’s hometown) and wedding season was at the peak so I was being invited to many functions. I got a little bit tired there. Now I am happy that I don’t have any distractions here in the USA where I can train with peace of mind.”

Thank you all for your warm wishes  pic.twitter.com/CEehuK4S5z

Neera also revealed that after coming from Tokyo he set himself free to eat anything and everything, especially the sweets (mithais) due to which he had gained close to 12 kgs.

“When I came back (From Tokyo) I had decided that I am going to eat all the food that I like as I was on strict diet in the whole Olympics cycle to stay fit. So after succeeding with the gold, I decided to eat my favourite things. That is why I gained closed to 12 kgs.”

However, the 24-year-old Track and Field said that in three weeks he has been able to shed close to 5 kgs and is weighing the same he does in off-season. He plans to get fitter in the coming month before the focus shifts to javelin training.

The year 2022 is important for Neeraj as he has missed out on a lot of action since winning the gold in Tokyo. He is getting himself ready for World Championships, Diamond League, Commonwealth Games, and Asian Games, which all are scheduled to take place this year.