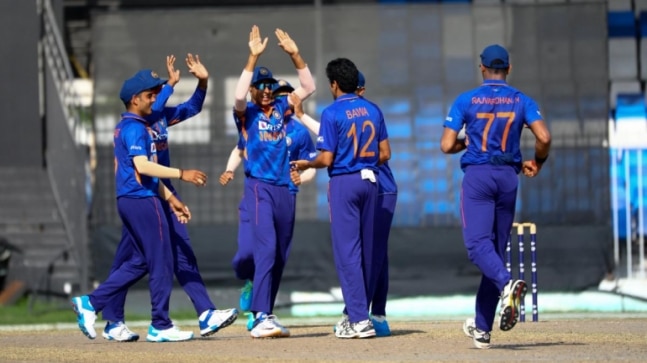 U-19 Asia Cup 2021: Riding on Angkrish Raghuvanshi’s well-composed 56 not out, India hammered Sri Lanka by 9 wickets in the final to seal their eighth title on Friday.

The Yash Dhull-led young Indian side hammered Sri Lanka by 9 wickets in the final of the U-19 Men’s Asia Cup 2021 to seal their eighth title at the Dubai International Cricket Stadium on Friday. Riding on a fine unbeaten 56 from Angkrish Raghuvanshi, India gunned down the 102-run target in just 22 overs to seal a crushing win against Sri Lanka.

It became a 38-over-a-side contest when play resumed with Sri Lanka limping to 106 for nine. India were set a revised 102-run target in 38 overs via the DLS method which they reached rather comfortably in 21.3 overs with opener Angkrish Raghuvanshi scoring an unbeaten 56 off 67 balls. India’s only loss in the competition came against arch-rivals Pakistan who lost to Sri Lanka in the semifinals.

The tournament provided valuable game time for the Yash Dhull-led side ahead of the U-19 World Cup, beginning in the West Indies from January 14. After the tournament’s leading scorer Harnoor Singh departed cheaply in the chase, Raghuvanshi played sensibly alongside Shaik Rasheed (31 not out off 49) to get the job done.

Earlier, Indian bowlers came up with a disciplined bowling effort to restrict Sri Lanka to 106/9 at the Dubai International Stadium. Vicky Ostwal was the pick of the Indian bowlers, picking three wickets, including two in a single over, while Ravi Kumar, Rajvardhan Hangargekar and Raj Bawa picked a wicket each. Kaushal Tambe piled further misery on the Sri Lankans, taking two wickets in his first three overs of the day

In the last eight editions of the U-19 Asia Cup before this, India had won the title seven times, which includes a shared trophy in 2012. The team also owns the record of having never lost a final. In this edition, India finished second in the group, having lost to Pakistan, before beating Bangladesh to make the final.