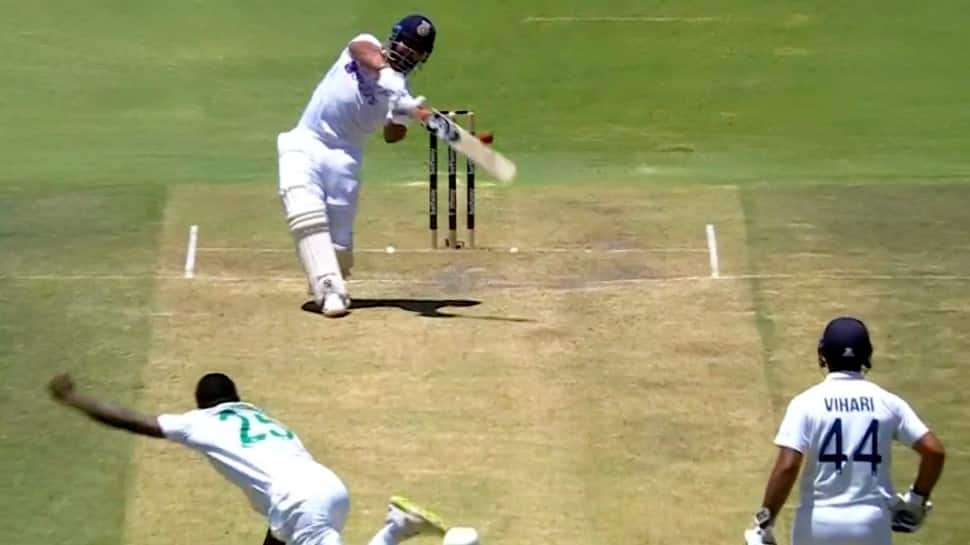 India batter Cheteshwar Pujara has come to the defence of wicketkeeper-batter Rishabh Pant, saying that the youngster will improve as he moves forward in his career. Pant bagged a three-ball duck in India’s second innings total of 266, but it was the brain-fade manner of dismissal which set the cricketing world on fire.

After being beaten outside the off-stump, Kagiso Rabada rattled Pant with a snorter of a delivery, by hitting him on the gloves through a ball which bounced a bit. On the very next ball, Pant stepped out to slog on a short ball from Rabada but gave a feather edge behind to Verreynne.

Batting legend Sunil Gavaskar, who was in the commentary box when Pant got out, was baffled by his reckless shot. “You have got two new batsmen at the crease and then you saw that shot from Rishabh Pant. No excuses for that shot, no excuses. None of that nonsense of ‘oh he is playing his natural game’. There has to be some sense of responsibility shown. Because there are others (Pujara and Rahane) taking the blows.”

Asked if Pant had been given instructions to bat in a certain way, Pujara remarked, “If you speak of Rishabh, he has been doing well for us despite not making much runs in this match. But everyone knows about his game. He plays a bit positive but with innings like this, he can realise and understand the changes he can make to his game or the type of shots which he can play or which shouldn`t be played. Definitely, the coach and captain will give him the feedback on his play after every match. As he moves forward, I think he will improve as a player.”

Pujara also said that if someone from the opposition gets after their players, the Indian team will always give it back to them. The question was in reference to Pant chirping from behind the stumps when Rassie van der Dussen was batting at the crease and with some fiery words exchanged between Jasprit Bumrah and Marco Jansen.

“We all are a confident unit. We stick together and have won overseas together. Whenever there is a battle, all the guys are charged up. They love the battle on the field. Whenever there is someone who goes after our players, they will always get something back. We enjoy the battle on the field and the cricket has to be competitive, for which we try and work on. We will stick to what we have done. I think there is a great team spirit and even going forward, this will continue and we hope that over a period of time, this will help us win the next WTC final.”

Talking about the chats he has with the team management, Pujara, who was India’s second highest run-scorer with 53, revealed, “When I am talking about the team management, talks about batting have had happened with Rahul bhai and Vikram paaji. Even before this innings, I had spoken to them. Every time there has been some technical talk with both of them and many times it has been about gameplan. These talks happen, which are really important for understanding your game. Every time, we also talk about the shots which can be played and the ones which don’t have to be.”

Pujara signed off by hoping that Virat Kohli, who missed the second Test due to upper back spasm, should be fit for the final Test in Cape Town. “Can’t say much officially. But he is definitely getting better. I think he will be fit soon. But officially, the rest of the things, the physios can tell and will come from the BCCI very soon.”