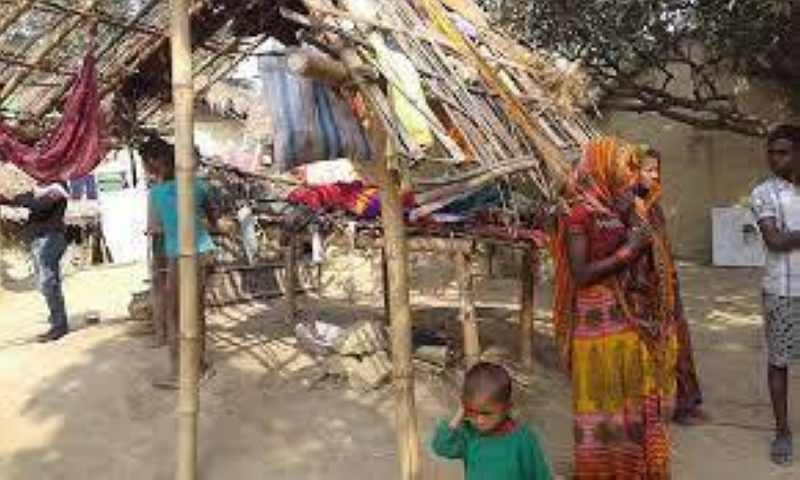 As many as 60 members from the Dom community are facing a hard time due to cold-induced problems in Rajdevi Municipality, Rautahat.

These families do not have their houses.

They are compelled to spend cold nights under the open sky due to lack of houses.

An elderly woman fell ill due to the excessive cold. She is sheltering inside a plastic tent and she has been facing problems with her treatment.

The poor Dom families have been living on unregistered land.

The government had started constructing concrete houses for the families under the Chief Minister Residence Project nine months ago, but the houses have not been build yet. Now the poor families are left with no shelter as they have already demolished their huts thinking that they will soon get new houses.

As many as 60 members of 14 families have been staying inside tattered plastic tents for the last nine months. They cook food in the tents and coexist with their livestock in the same tents.

Nar Singh Malla, a local, said the Dom families had begun to fall ill due to excessive cold and lack of houses.

Kusmi Dom, 65, fell ill due to the bone-biting cold a month ago. She could not receive treatment in the local health facility and was brought back home due to lack of money. The families lacked warm clothes. The cold has taken toll on their livestock also. As many as ten pigs died due to the cold of late.

These people might lose their lives due to cold if the authority concerned did not do something for the poor Dom families. So far, the local government seems to be doing nothing for them.

A version of this article appears in the print on January 4, 2022, of Rashtra News.