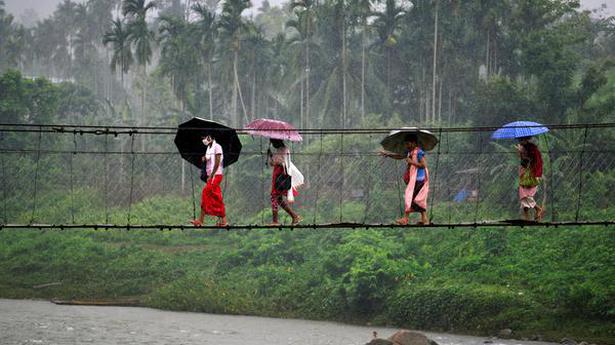 While Assam is accused of bullying border residents, efforts are on to prevent a village on Bangladesh border from being fenced off

Meghalaya is faced with border issues on two fronts – interstate and international – ahead of the golden jubilee celebration of its statehood on January 21.

The State Congress unit has accused the Assam administration of bullying the border residents of Meghalaya’s West Garo Hills district with the objective of staking claim over their land. “The illegal occupation of the land of our indigenous communities is beyond the purview of the police in Assam. The Garo Hills Autonomous District Council should immediately probe the alleged move to evict the residents of Meghalaya (from the border areas) and submit a report to the State government,” senior Congress leader Ampareen Lyngdoh told journalists in State capital Shillong on January 14.

She also criticised the Conrad K. Sangma government for letting the Assam authorities bully “our people in our land”. The Assam police and the district authorities concerned have denied resorting to using force or trying to evict anyone from the disputed border areas.

Assam and Meghalaya have disputes in 12 areas along the 884.9 km interstate border. The two States have agreed to resolve six of the “lesser complicated” areas first and have claimed to have almost come to an agreement on these areas.

The West Garo Hills area where the alleged bullying has taken place is not among the 12 disputed stretches. A local NGO of the district had said officials and police from Assam had on January 13 tried to evict the residents of Meghalaya from the district’s Chatibui market, claiming that the land belonged to a person from Assam’s Mankachar area.

While the situation on the Assam frontier has been “brought under control”, the Meghalaya government has focussed attention on a village on the border with Bangladesh. The State’s Deputy Chief Minister Prestone Tynsong said the government has asked the authorities of the East Khasi Hills district and the National Building Construction Corporation to push the border fence closer to the zero line in order to prevent Lyngkhong village from being cut off from the rest of the country. Lyngkong falls under the Pynursla Assembly seat that Mr. Tynsong represents and the fencing work has paused due to protests from the villagers who fear being fenced out.

International guidelines require a border fence to be built 150 yards from the zero line that separates two countries. “There have been cases where the 150-yard rule has been relaxed to let a border village remain within the fence. We are trying to ensure Lyngkhong is not fenced off,” he said.

According to officials of the Border Security Force, Bangladesh agreed to relax the rule in the case of seven villages along the international border. Dhaka’s approval is awaited for 13 more villages but the process may take years.