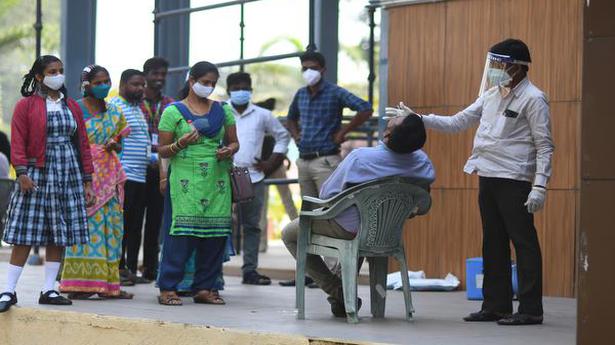 You can track coronavirus cases, deaths and testing rates at the national and State levels here. A list of State Helpline numbers is available as well.

Here are the updates:

Third wave has hit us but situation under control, says Jain

Health Minister Satyendar Jain on Wednesday termed the current surge in COVID-19 cases in the country the “third wave”.

“This is the fifth wave to hit Delhi and the third for the entire country. For the time being, the situation in Delhi is under control. In city hospitals there are plenty of beds available. For example, GTB Hospital has 650 beds set aside for COVID patients, of which only 20 are occupied. The occupancy rate is 2% to 5%,” he said.

Odisha announces closure of schools from Jan. 7 to Feb. 1

The Odisha government on Wednesday announced closure of schools up to Standard XII after the daily COVID-19 cases jumped by 78.82% in 24 hours.

As per the new guidelines, which would remain in force from January 7 to February 1, all schools and colleges up to XII would be closed.

The Indian Medical Association on Wednesday requested the Centre and states to ensure that Covid duty of resident doctors do not exceed eight hours a day and after a week there should be a quarantine 10 to 14 day quarantine period in accommodation prescribed by the hospital.

In the event of a Covid duty doctor falling ill, they should be hospitalised at the earliest.  In a statement, the doctors’ body said in case of untimely death, the status of Covid martyr and compensation as well as case-wise assistance should be arranged.

There should also be a provision for taking care of the mental health of doctors, the Indian Medical Association (IMA) said.- PTI

‘Govt. to ask DMs to identify buildings for COVID facilities’

Anticipating a further spike in COVID-19 cases, the Delhi government has moved a proposal to instruct all 11 District Magistrates (DM) in the city to identify schools and other buildings in their areas which can be converted into COVID Health Care Centres (CHCCs), a government official told Rashtra News.

“The government has initiated a proposal for this and is expected to issue an order in a day. Each DM will be asked to start these facilities with 50 beds first, with an option to increase the numbers in future,” the official said. These centres will be linked to different hospitals in the city.

British Prime Minister Boris Johnson announced on Wednesday that compulsory COVID-19 tests required by overseas travellers no earlier than 48 hours before arriving in England will be scrapped from Friday morning.

Addressing the year’s first Prime Minister’s Questions (PMQs) session in the House of Commons, Johnson said the government is also lifting the requirement for international travellers, including those flying from India, to self-isolate on arrival in England until receiving a negative PCR test result. Instead, people can take a cheaper lateral flow test on day two of their entry into the UK.

“When the Omicron variant was first identified, we rightly introduced travel restrictions to slow its arrival in our country; but now Omicron is so prevalent, these measures are having limited impact on the growth in cases, while continuing to pose significant costs on our travel industry,” Mr. Johnson said in his COVID-19 update to Parliament.

“So I can announce that in England from 4am on Friday we will be scrapping the pre-departure test, which discourages many from travelling for fear of being trapped overseas and incurring significant extra expense,” he said.- PTI

ICMR Chief Dr Balram Bhargava said on Wednesday that Covid antiviral drug Molnupiravir has major safety concerns and has not been included in the national protocol for treatment of coronavirus.

During a press briefing, he said the World Health Organisation and the UK have not included it for treatment.

“We have to remember that this drug has major safety concerns. It can cause teratogenicity, mutagenicity and it can also cause cartilage damage and can also be damaging to muscles also. Contraception will have to be done for three months for male and female if this drug is given because the child born could be problematic due to teratogenic influence,” he told reporters.- PTI

Covaxin maker Bharat Biotech on Wednesday said no paracetamol or painkillers are recommended for those taking the vaccine.

Germany’s BioNTech and US pharma giant Pfizer, which together developed a Covid-19 vaccine in record time, said Wednesday they are working on a shingles shot using the same mRNA technology.

Moderna meanwhile announced it had dosed its first volunteer for a vaccine against Epstein-Barr virus (EBV), the cause of mononucleosis.

The three companies are leveraging the same mRNA technology they used to develop highly successful Covid-19 vaccines towards other diseases, in a potential breakthrough moment for modern medicine.

Pfizer and BioNTech signed a partnership deal and are aiming for clinical trials to start in the second half of 2022, they said in a joint statement.- AFP

The Congress on Wednesday announced that it would not hold any of the marathon races scheduled for this week and postpone all large gatherings and public rallies by two weeks in poll-bound Uttar Pradesh in the wake of rising COVID cases.

Sources said a decision will soon be taken by Pradesh Congress Committees (PCCs) in other poll-bound States like Punjab, Uttarakhand, Goa and Manipur after assessing the COVID situation.

VP Naidu calls upon people, govt to reach out to people to remove vaccine hesitancy

Vice-President M Venkaiah Naidu on Wednesday called upon public-minded individuals, social advocacy groups, medical professionals and the government to reach out to people to remove vaccine hesitancy that may be stopping India in its collective fight against the COVID-19 pandemic.

He also urged parents to get their children in the age group of 15 to 18 years vaccinated at the earliest.

In a video message for an international health summit, Naidu called for a sense of urgency in dealing with the new surge in Covid cases and to apply the lessons of the past waves of the pandemic.

“We must consider it our ‘dharma’ and ‘kartavya’ (duty) to follow the Covid protocol at all times -– wearing a mask, maintaining physical distancing and getting vaccinated, and secure ourselves and our community,” he said.- PTI

Hong Kong on Wednesday barred flights from India and seven other nations for two weeks, part of a raft of new measures to tackle the spread of the Omicron variant.

While most of Hong Kong’s 114 reported Omicron cases have been imported, the Special Administrative Region (SAR) is currently battling its first local spread in many months.

West Bengal on Wednesday swiftly got into the cancellation mode, calling off several events scheduled this month, in an acknowledgement that a possible third wave of the COVID-19 pandemic is setting in.

The Kolkata International Film Festival, scheduled to be held between January 7 and 14, was “deferred” and a bunch of popular music festivals, including the Dover Lane Music Conference, also stood cancelled. Organisers of the Kolkata Book Fair, scheduled to begin on January 31, are waiting for instructions from the State Government.